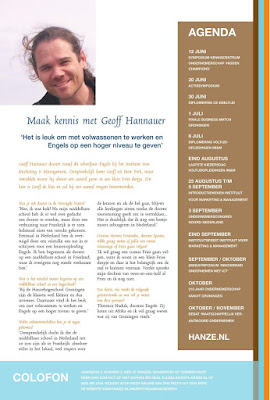 It's been several days since my cousin, Geoff Hannauer, died in the Netherlands, at the age of 55.  He left behind three children, along with the rest of us who aren't dead yet.

I'm really the last person who should be writing any kind of commemoration of my cousin, Geoff.  But when I look on the internet, virtually all that comes up is this award he won for something to do with marketing, I think.  I don't know, it's in Dutch.

In an image search, it's the only picture of Geoff.  Is his name so common, I wonder?  No, I slowly determine.  The only other thing that comes up is a quote from a letter Geoff wrote to one of his former teachers, which she published in a book.  The letter is an eloquently-worded appreciation for his time studying in Italy.

I don't know if Geoff kept himself off of the internet on purpose, and if so, I'm sorry to be messing things up by mentioning his name on a public blog.  But I'm prompted to write this by the simple fact that now, in addition to this image, one other thing comes up when I search for Geoff's name -- his obituary.  An obviously official-looking document, very recently published on the web, in Dutch.

Maybe someone who knew Geoff better than I can comment, or write me, and tell me if I'm doing something wrong here.  I do have friends who tried to keep themselves off of the internet, though doing a search for one of them just now, I see she has failed in this effort, or abandoned it, because her picture comes up first thing now.  I'm sure the Netherlands has good privacy laws and all that, but I'm still surprised that not one picture of Geoff Hannauer comes up, when you search for Geoff Hannauer.

But Geoff has three kids, and in a few years, they'll be adults.  Well before they become adults, they might do a search about their father on the web.  When they're trying to make sense of things, and figure out who this man was, who died so young, who was their father, maybe they'll search the web, and find nothing.  To me, it doesn't seem right.  So I write this memorial, to the extent that it is a memorial, as a sort of placeholder.  The name, Geoff Hannauer, is in it, along with his picture, and some stuff in Dutch that I can't read.

Geoff was one of four kids who were raised by George Hannauer, and my aunt, my mother's oldest sister, Jane, in New Jersey.  I used to see him once a year on Christmas, for his family's annual Christmas party.  When we were both in our twenties was when we saw the most of each other.  He and his first Dutch wife lived near our mutual aunt, Tippi, and when I'd come visit Tippi, her husband, Henry, and their kids, there was a time when Geoff was often there, too.

As an adult, in his twenties, anyway, Geoff was animated, full of vitality, with a sharp wit, quick mind, great sense of humor, a passion for doing many different things in life.  He traveled widely, learned many languages fluently, read books and talked about them.  He and I followed some of the same alternative media and read some of the same leftwing books, and talked about them, along with Tippi and Henry.

I don't know exactly when Geoff and I fell out of contact, but it was sometime in the late 1990's.  He had moved from New Jersey to the Netherlands, and it had been some time since I had seen him.  But around 2000 or so, I started making regular trips to the Netherlands and elsewhere in Europe, as a touring musician.  For years, every time I'd be coming to the Netherlands -- about once a year -- I'd email Geoff, checking with people I knew were in touch with him, to make sure I had the right email address.

Over the course of the past twenty years, as Geoff got together with another Dutch woman, had three children there in the Netherlands, every time I'd be doing gigs in the Netherlands I'd wonder how he was doing.  I never got a reply from him, and have never met his kids.  I have no idea why.  I have asked people if they knew, and nobody ever seems to know.  Did I offend him?  Was he jealous?  I have no idea.

Maybe someone reading this knows, but now, it really doesn't matter.  Geoff was apparently sitting in front of his computer when he had some kind of brain embolism, and died right there in his home in the Netherlands.  Who was Geoff Hannauer?  I have no idea, really.

But his name will come up on the internet now.  And he was my cousin, and he had many positive characteristics, last I checked.  Admittedly, it's been a while.  But if you happen to be reading this because you're one of Geoff's kids there in the Netherlands, hello!  You've got relatives in Portland, Oregon.  Please drop by if you're in the neighborhood!  I'd love to meet you.
Posted by David Rovics at 8:25 AM 1 comment: