I'm not much for doing research into the activities of intelligence agencies. And I'm not involved with any groups doing this kind of research, aside from playing the occasional benefit concert. But anyone out there who is involved with researching what happened on September 11th, 2001 might be interested in what is below. 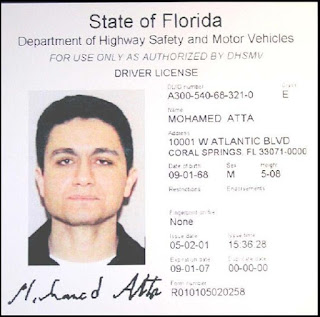 First I'll just introduce what it is that is below. This is something that was recently written up by a friend of mine. I'll call him Michael.

I first met Michael over twenty years ago. I know him originally through musical circles. Michael prefers to remain anonymous if possible, which means in this case that I'm the one vouching for his credibility. So I'll just say now that Michael is a highly intelligent, gifted, mentally healthy person who wishes harm to no one. He is only putting this information out there because he thinks it seems like the right thing to do. He is not delusional, and I'm sure that everything below is as accurate as he can recall.

Before I present you with Michael's recollections, I want to just say that none of this convinces me that the 9/11 attacks were carried out by Dick Cheney and his henchmen. Maybe everything Michael remembers is stuff some of you who do this research already know. For me, it just raises more troubling questions about the role of various US and international intelligence agencies in all kinds of nefarious activities.

Here's my slightly edited version of what Michael shared with me:

9/11 and the Hollywood Bread Building

With the 15th anniversary of the September 11th, 2001 terrorist attacks on the United States coming up, I decided to write down what I know about what lead up to them. You see, I knew Mohammed Atta.

I should have written this down years ago, but for the first years I feared for my and my family’s lives, and after that had passed, I guess I just wanted to put it behind me. I am sure that after 15 years, I might have some details wrong, but the core story is correct.

The Hollywood Bread Building is a 10-story building overlooking Young Circle Park, the central park in Hollywood, Florida. It is currently abandoned and according to the papers, there are violent 'floor turf wars' being fought inside by the people squatting there.

But in 2001, it was filled with many small businesses, including mine. I could see Young Circle from my 9th floor windows. That’s where Shuckums was (and maybe still is) – the oyster bar where the 9/11 hijackers last got together to have a meal together, before boarding their flights to murder thousands of people. It was first widely reported that this happened on September 10th, but I believe that timeline has been revised. I have made the conscious decision not look up any facts about 9/11 now, for fear that it would influence or shape what I remember.

I worked together with an employee of mine in these offices on the 9th floor – let’s call him Joey (not his real name). As soon as Mohammed Atta was fingered to be the ringleader in the attacks, both Joey and I almost fell out of our seats. “That guy??? We know that guy!”

Joey would hang outside the front door a lot, because he smoked and wasn’t allowed to do it inside the building. So did others from other floors. Atta was a frequent visitor to our building. What’s interesting is who else was renting offices in the building.

There was Moishe and the Israeli 'social club' on the 9th floor. They’d come in in the late afternoon and stay until all hours of the night, sitting on couches and making phone calls on the speaker phone in Hebrew. I often worked late, sometimes until midnight, and they’d be there with the door open, assuming that all other tenants were long gone.

Then there was the 'trucking company.' They were Americans, in a very small office on the 9th floor that probably rented for about $350 a month back then. They started moving racks of computer servers into that office.

This intrigued me, since we built rack-mounted computers for a living. I was intrigued why a company that was renting a $350 office was moving in what looked like at least $100,000 worth of computer hardware.

And what on Earth could you need that kind of computing power for, if all you were doing was keeping track of a very small fleet of trucks. I asked the guy. He had no comment and ever since that day, they kept their door shut.

And then, there was the 'moving company.'

These guys also spoke Hebrew. I remember as if it were yesterday. Talking to a young guy who worked for them, outside the door, where they were smoking. I welcomed them to the building and asked what they kind of work they did.

The young guy didn’t seem to know what to say. When he started to say something, an older guy shut him up and said “we are moving company.” Then he told the young guy to put out his smoke and come inside with him.

What do these three companies have in common?

Well, on September 12th 2001, they were all gone! Like they were never there. Offices cleaned out and left without a trace.

Johnny Cowboy and the 10th floor

And then there was Johnny Cowboy (not his real name).

Johnny was an interesting fellow. He acted as handyman for the building, and offered car washes to people parking in the lot across the street.

He never said much, but Joey and I saw him all the time and were friendly with him. He looked like a cowboy out of an old Western. While he scowled at most people, he seemed to like us and actually spoke to us sometimes.

The 10th floor had been home to the Psychic Friends Network when I first moved in. Later on, it became a technical school, and then it was empty.

It was different than all of the other floors – you couldn’t get into the floor without a key. It was off-limits to all. But Johnny Cowboy had keys.  And I think he crashed there from time to time, as well. Meaning, Johnny knew everything that went on in the building at all hours.

One day, I came to work and saw fire trucks outside the building. When I got in the elevator, I noticed that a horrible stench had enveloped the whole building.

Turns out someone found Johnny’s decomposing body on the 10th floor. There were strange cops in the building, the kind with suits, sunglasses and earpieces.

I asked what happened.

"Looks like he drank himself to death. They found a bottle next to his body," a firefighter answered.

Joey and I looked at each other, puzzled.

The cop told us that we don’t want to go around asking too many questions, and told us to move along.

Could Johnny have been a recovering alcoholic and had a relapse? Possible. Could he have seen something in that building at night that he wasn’t supposed to? Possible.

Joey and I struggled for a while after September 11th, whether we should call the FBI and tell them about Atta hanging out with the Israelis. After a few days, we did. They took our numbers. Nobody ever called us back or followed up.

So there it is, best as I can remember it.

The Israeli social club, the 'trucking' firm with the server banks, the Israeli 'moving company' whose employees didn’t seem to know what business they were in – all went poof on September 12th.

And Johnny Cowboy, who drank himself to death or saw something he shouldn’t have. One bizarre story, isn’t it?

Memory is a funny thing, and I’m sure I have messed some details up. But I wanted to write it down exactly as I remember it, before comparing notes with Joey or researching on the internet.

A few months after this happened, I closed my company, sold our house and went on a multi-year RV trip with my (now ex-) wife.  I didn’t feel comfortable being able to be easily found.  Not having an address seemed just fine with me.

For at least the first year or two, I fully expected that someone would probably find me and Joey, either victims of unfortunate accidents or more likely, with just a single gunshot wound to the back of our heads.

I didn’t tell anyone about any of this for years, out of fear, but then decided that if someone saw us as a threat, we would have been long gone. In a sea of conspiracy theories, anything is easily discredited. I don’t have a theory – I just know what I saw. I don’t claim to know what it all means.

Joey and I check in with each other every year on 9/11 to cheer at having made it yet another year.

**AUTHOR’S NOTE:  This is a revised version of my account. The original version that was very briefly published contained references to a murder and law enforcement raids that were connected to the building in question.  It was immediately brought to my attention that my and my partner’s families’ safety could be endangered because of organized crime involvement in these events.  I have decided to take out these parts of the account.  I have no evidence that the deleted events had any connection to the September 11th attacks.**