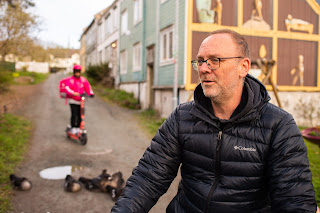 Part of the reason, though, that Svartlamon is such a special place is that it is located in Trondheim, a city five hundred kilometers north of Oslo, where it's too cold and wet most of the year to ever attract the crush of tourists you will find, say, hanging out in Copenhagen's Christiania on a typical summer evening.

Svartlamon is undoubtedly reminiscent of Christiania, but much smaller, and without the open-air hash market or the tourists.  But as with Christiania, Svartlamon was originally a neighborhood squatted by people that broadly shared certain values.  I would characterize what folks tended to have in common by saying that we're talking about people who generally wanted to live in some kind of community, people who had serious questions about who owns this world (this country, this city, this property), people who rejected militarism, and people who were pioneers in areas like emotionally healthier ways of doing school, an embrace of do-it-yourself communalist initiative, an open attitude towards the constructive uses of cannabis and psychedelic drugs, and a general embrace of living life as far more important than achieving status or collecting lots of material belongings.  At the time Christiania and Svartlamon were squatted, what the media called "the counterculture" in the US would have described the folks who originally squatted the neighborhoods as freaks and radicals.

There are no gates or signs indicating that you are entering the neighborhood of Svartlamon, but from whichever direction you're approaching it, it's fairly evident fairly quickly that you're no longer in a normal neighhorhood.  Suddenly the rules have changed, and everything is colorful, artistic, and often looking like it was made out of recycled or found materials.  From public art of various types to the houses people live in, there's a distinctly whimsical quality to be found, from pieces of art that are clearly just a temporary display to homes with diagonal windows.

Most of Svartlamon could be described as "residential," but within and between the residences are spaces where community happens in its many forms, whether it's a jam session on a deck or one of the daily gatherings of children at the community trampoline, located strategically, and accidentally, very close to Svartlamon's preschool.

From an audio perspective, the preschool is the heart of Svartlamon during the day, with the sounds of generally very happy children frolicking about inside and outside the building, the only one in the neighborhood that is actually surrounded by fencing, to keep the little ones from running into the one small road the runs along one side of the neighborhood.  By late afternoon and into the evening, the center of activity shifts fifty meters in the direction of the railroad tracks nearby the bar and restaurant you'll find there called the Ramp.

One of the great ironies of Svartlamon, as with Christiania and various other hotspots around Europe and beyond, is that for most of its existence since it was originally occupied by the current intentional community of residents several decades ago, it has been under some form of threat from the local authorities, and has been characterized in the press and by many political actors as a hotbed of freeloaders who just want to hang out and do drugs.

I call this irony because it is exactly communities like Svartlamon that have been at the forefront of the kind of evolution in society that so many people talk about today.  Turn on BBC or NPR (and I'm guessing this is equally true of the Norwegian broadcasters) and you'll hear lots of stories about how happy the children are in the Finnish elementary schools.  You'll hear about the amazing capacities of psilocybin in helping people overcome addiction and depression.  You'll hear about how much more productive workers are with a shorter work week in modern-day France.  But where did things like modern ideas for emotionally healthy education, advocacy for the medicinal power of psychedelics, or the wholesale rejection of the Protestant work ethic come from?

Lots of places, of course.  But if you want to find some of the foremost experts on early childhood education, the medicinal use of mushrooms, or superior work-life balance, you certainly need look no further than the boundaries of Svartlamon.  And the same can be said today of Christiania, for that matter, or even of the vestiges of what was once the intentional community known as the Farm in Tennessee, today a land cooperative populated by a small collection of people that still includes world-class experts on midwifery, tofu production, and a lot of other things that were once far less common.

In my world, places like Svartlamon are encouraged to thrive by authorities that ideally do some combination of leaving them alone, and helping them prosper, when such help is desired by the community.  It's been exciting for me to witness how much more of this sort of thing seems to be happening lately, with both Svartlamon and Christiania.  While there's an electrifying edginess that can be present at times when communities like Svartlamon are facing some kind of existential threat, and this can bring people together in positive ways, it's not the desired state of affairs.  Much better is to see more of what's been happening lately, which is the ongoing growth of this wonderful community.