Before going to bed last night, I learned from a post I was tagged on on Facebook that Mitch Podolak had died.  If I ever checked my Feed, I might have learned earlier -- he had died several days earlier, on August 25th, 2019.  Incidentally, exactly one year after US Senator John McCain died, who was about as different politically from Mitch as it would be possible to be.  (I probably only happen to remember that because I wrote a song about the man when he died.  If I wrote one about Mitch, it wouldn't be like that one at all.) 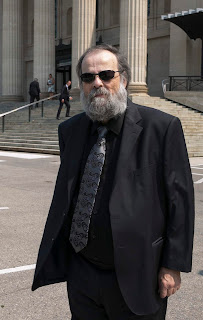 I did not know Mitch well, and I don't want anyone to think I'm pretending that I did, just to get that out there.  But I do feel compelled to say a few things about Mitch.  Well, one thing, mainly:  Mitch was a revolutionary, a communist with a small "c," of the highest caliber.

You'll find Mitch being remembered throughout the press in Canada, and they naturally focus on what he was mainly known for -- starting up the Winnipeg Folk Festival, and being an organizer of festivals and other things music-related.  The fact that he was politically on the left is not ignored, but it's not emphasized.  Which makes perfect sense -- he wasn't organizing protests, mostly, he was organizing festivals.

The secret, which Mitch knew well, was that the best protests are festivals.  Or they can be -- at least in terms of the part of the protest that occurs on a stage with a sound system.  This is my phrasing, but if you read interviews with Mitch over the years, you'll hear the same sorts of things, more humbly stated.  An organizer, just like a musician, can be motivated by both the love of music as well as the desire to use music as a tool for radicalization and popular education.  There is no contradiction here, and Mitch very obviously embraced all of the above.

I'll just share a few brief recollections, too small to call stories, but just a few memories, while they are freshly dredged.

I've been to Manitoba three times in my life, and each time the reason for the trip was Mitch and his fellow organizer, Derek Black.  It started with a phone call.  Mitch called me, introduced himself, and said he wanted to organize gigs for me in Winnipeg and Brandon (Brandon being basically the only other city in Manitoba, and it's very small).

I was happy to have my first gig in Manitoba.  In asking Canadian friends about the guy who had called me, the response was universal, more so among musicians -- you got a call from Mitch Podolak?  Cool!  (Sometimes with a tinge of jealousy.)

I just want to stop here to point out that this is not a normal situation for someone like me, for those who don't know.  I never get gigs at folk festivals, I'm way too offensive for that kind of thing.  I almost exclusively play for activist groups, leftwing political parties, labor unions and stuff like that -- not folk gigs with comfortable middle-class people in the audience who are going to be appalled by my first chorus.  "Comfort the afflicted, afflict the comfortable," that's my motto (I borrowed it from my friend Utah Phillips).

This motto of Utah's and mine also very much applied to Mitch and everything he did in life, as far as I can tell, and he did it primarily as an organizer of musical events, of all sizes, from humble house concerts to big festivals with CBC sponsorship.

Staying on this point about how unusual it is for someone like Mitch to call me about doing a gig in Winnipeg:  as an organizer, Mitch knew loads of musicians who could pack a large room in Winnipeg.  He knew I wasn't one of them, and he brought to Winnipeg not once, but three times over the course of eight years.  And he and Derek apologized profusely on every occasion, that this wasn't happening on a more frequent basis.

It was a wonderful first gig in Winnipeg, as I recall, and it also happened to coincide with the Occupy Wall Street phenomenon.  The Occupy encampment in Memorial Park there was fantastic, one of the most active in North America of the several dozen I spent time in across the US and Canada in 2011.

I stayed with Mitch during that first visit, and my recollection of his home is of a comfortable but small place.  Probably no bigger or more opulent than the generations of eastern European communists who settled in Ontario and across Canada that Mitch was proud to be a descendant of.

Hanging out in Mitch's little place with this very large man, it was impossible not to notice the fact that every available space around us was being used for the purposes of hanging slabs of meat that Mitch was drying for the purposes of making sausage or something along those lines.  This was a man who identified strongly with the red political traditions of his family and his community, as well as with the culinary traditions, it appeared to me -- for better or for worse, depending.

The conversations were long and rambling and full of great stories.  I'm sure we talked about music as well as politics, but the anecdote from Mitch's living room in 2011 that I remember most clearly was something he was saying about a protest he had been involved with organizing in the 60's.  I can't remember what the protest was about, but a whole bunch of recent immigrants from eastern Europe came to protest the protesters.

Unlike Mitch's family background of leftwingers and artists, more recent immigrants from eastern Europe, having had the decidedly mixed blessing of growing up behind the Iron Curtain, are often decidedly less sympathetic to socialism of any kind.  But what was so memorable about this little tale was not that patriotic Canadian immigrants showed up to protest the protesters, but how Mitch got rid of them:  he went over to their lines, probably using his knowledge of various eastern European languages to his benefit, and quickly convinced them that he would report their activities to the authorities in their home countries in eastern Europe.  Fearing for their family's safety back home, they abandoned their counter-protest.  I'm still not sure what I think of that tactic, but I really enjoyed Mitch's recounting of it.

The morning after my first gig in Winnipeg, Mitch took me for a short walk.  There were other people in the house, but I admit the only ones I remember were James Keelaghan and Nathan Rogers.  James is one of the best songwriters alive today, and Nathan's father Stan was, too, before his untimely death.  I don't remember what we talked about over breakfast, only that when we entered the house, Stan introduced me to James and Nathan, saying, "David is another member of your profession," to which James immediately shot back, "oh, you're a prostitute, too?"

When Mitch first organized the Winnipeg Folk Festival back in 1976, it was apparently initially planned as a one-off celebration of the centenary of this city with its long history of labor struggle.  As far as I know, the last big event Mitch was involved with organizing was another centenary event, the 100th anniversary of the Winnipeg General Strike, last May.

Mitch had had a bad fall since I'd last seen him, and was now using a wheelchair to get around.  I was concerned about the state of his health when I first met him, but it had certainly declined much faster because of that fall, it seemed.  Despite his physical circumstances, he was happy to be at the festival he had been instrumental in organizing, and between the music on the stage in front of him and friends around him who he had known in many cases for decades, it was a good last event I'd say.

Because of the union sponsorship, Mitch was able to bring in musicians from across the US and Canada that were some of his favorite of what we could call the more politically-oriented performers on the folk music circuit, or in my case, performers not on that circuit at all, except when Mitch and Derek are organizing the gig.

It was a lovely day at that festival at Memorial Park, the same place Occupy had occupied.  I knew and loved most of the performers already, but it was my first time hearing Maria Dunn, who blew me away, along with Joe Jencks, James Keelaghan, and a great set from Nathan Rogers.

Sitting with Mitch in the park with this kind of array of musicians, and people who had been working with Mitch on festival organizing efforts in some cases since the 1970's, Mitch was in great form for reminiscing.  I think the conversation began with talking about how good the various performers on the stage were, and Mitch got to talking about all the people around on the grass who he had known for such a long time in so many different contexts.

That day the one he talked about the most was Nathan.  Mitch started the record label that Stan Rogers had been on.  When Stan died in a plane crash after playing in Texas at the Kerrville Folk Festival in 1983, Nathan was two.  Mitch talked about the sort of black hole that Stan's death left the community with, and he talked of his love for Nathan, and some stories from Nathan's childhood, in which Mitch clearly played a major role.  Despite such a terrible loss, Nathan seems to have turned out very well.  (Which seems like a strange comment to make about a guy who's only a few years younger than me, but in any case, it's true.)

To whatever extent Mitch was responsible for that fact I don't know, but the deep, swelling love within his heart was unmistakable, and, in fact, on his sleeve.  Mitch Podolak was a beautiful human being, full of life and love.  A truly great organizer, a person who brought many, many people together, and created models for others to do the same.  And most definitely a red.  Well done for a life well lived, Mitch.  L'Chaim.  You are now officially off the hook for trying to read that 1917 Yiddish edition of Das Kapital you found.
Posted by David Rovics at 8:53 AM 2 comments: