I vacillate between being horrified by Trump and being horrified by all the people who are actively trying to make sure I'm horrified by Trump.  Specifically, the ones that run nonprofits, NGOs, and other money-grubbing "activists."  I don't know what they do with the rest of their lives, but whenever it involves my inbox, it has to do with fear-mongering and raising money, in equal measure. 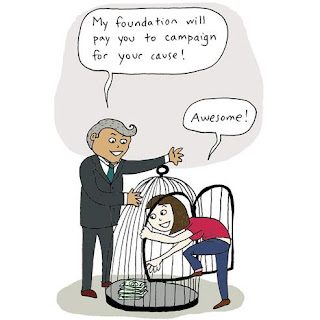 Evidently, these groups are making more money than ever before since the election.  (This has been all over the press.)  They can presumably use all the money to raise more money, and to have the occasional protest, to make sure we remember that they're "activists," so we can give them more money.

I'm trying to organize this year's concert tour.  It's what I do, regardless of who's in the White House.  I thought for about two seconds about figuring out how to make it a specifically anti-Trump tour, but then I felt nauseated and had to stop thinking about doing that.  See, I'm absolutely certain I could get lots more gigs if I jumped on the bandwagon.  But my principles are more important to me than money, so I can't do it.

POCI1 has been in power for the past eight years.  While in power, they have helped turn the USA into the fracking capital of the world.  There's no more clean water left in several states.  We had the worst environmental disaster in the history of the world -- and I'm not talking about fracking, I'm talking about the Gulf of Mexico.  After that, deep water off-shore oil drilling continued.  POCI1 deported millions of undocumented human beings back to war zones south of the US border.  POCI1 facilitated a violent military coup in Honduras, violently overthrew the government of Libya, continued military occupations of several countries initiated by POCI2 before them, tried hard to negotiate a massive "free trade" treaty, launched innumerable drone attacks against civilians in many different countries, and pushed hard to expand the anti-Russian military alliance called NATO.  And that's only a few of the things POCI1 did, only in the past eight years!

During the eight years before POCI1, when POCI2 was in power, in a nutshell, they did all the same shit.  They didn't deport as many people or jail as many whistleblowers or launch as many drone strikes, but they very violently invaded and occupied two countries, killing hundreds of thousands of civilians in the process.  They didn't do as much fracking, but it was early in the fracking era when they were in power, and the VP of POCI2 ran the company that invented the practice.

They don't put it that way at all.  They would have us believe that there is a battle between good and evil going on.  On one side, POCI1 and the "activist" groups defending our civil liberties and the environment.  On the other side, the evil POCI2 and the haters and deniers and their army of orcs.

I wish reality were so simple.  But it's not.  And as long as these "activist" groups are trying to convince us it is, just so they can make more money from our fear, they are part of the problem.  I don't know how to jumpstart a militant mass movement for real social change any more than you do.

But I do know this:  the way forward will not involve the leadership of morally bankrupt, cynical people or organizations that would have us believe there are sufficiently significant differences between POCI1 and POCI2 that we should give a shit which one is driving the train that is speeding towards the cliff.  Don't mistake reality for Middle Earth.  There is no Lothlorien among these politicians and their hangers-on.  Only Mordor.
Posted by David Rovics at 12:43 PM

Email ThisBlogThis!Share to TwitterShare to FacebookShare to Pinterest
Labels: politics

I think there's no jumpstart. The mass movement will emerge as it always has from the local. Your work with the Portland tenants union and Artists for Rent Control is an example of where to start, and many cities, especially in the US, have similar stories that can be shared and built on as common experience.

I appreciate your words, David, and agree with your stance. Thank you.
While I think there are important differences in the parties, such as the Democrats' increasing support for living wages, the corporate-military-fossil fuel-big pharma-media conglomerate-controlled Democrats are not our friends. The Obama Administration's policies have often been immoral and illegal.
Paula's right... local work and policy is very important and can make a difference. In Berkeley we just elected a progressive mayor and city council majority to replace the real estate and developer-controlled city government. We're anticipating greener and more humane policies as a result.

I'm excited to hear about that! Good for Berkeley. Now Portland, hopefully...


Right on David! I'm with you 111% No POCI (Pockee for Me!) i'm disgusted with capitalistic fear mongering Liberals.

Still wish to see a critical mass support, live and be the change that's needed as if all that bullshit wasn't even there.


Feeding it makes it stronger and neoliberalism vs neoconservatism brought us neofascism.

So rather than a slow boil, the heat's gonna get really cranked. So i for one want out of the friggin' pot and if i take the path less taken i might actually get off the stove rather than into the frying pan.

Nothing like coming extinction to put things in focus.


For every 100 failed #PeoplesCamps (GA Occupy inspired with codes of conducts, like Hazelnut Grove), there are maybe 10 who come through with the wisdom to know how to do it better next time.


Fact is people keep trying... and stop feeding the mechanisms of fear and control.

Maybe that's a naive view, but everything else looks like "more of the same" to me.

Peace Brother and keep singing and speaking. We need your voice and insights more than ever!

An interesting perspective- one that I am sure is shared by many of us that "feel the Bern". I agree that the Democrats are not as progressive as their campaign slogans would lead us to believe they are, and I have been disappointed by both the Clinton and Obama administration's corporate kowtowing, war-mongering, and destructive environmental policies. That's why I put my hope in the Sanders campaign, as faint as that glimmer of hope may have been it felt good to vote for a politician who seemed to really believe in his campaign platform. But I would disagree with the assertion that Democrats and Republicans are the same, simply because they cross over into spaces of "shared immorality". There are many stark differences in the way that Democrats and Republicans structure their moral beliefs, their political platforms, and their cabinets, and though these differences aren't as numerous as I wish they were, they are important nonetheless. It is an act of cynicism, in my view, to throw ones hands in the air and say they are both the same simply because they are imperfect and even destructive in many of the same ways. Within the current system- dominated by corporate greed, gerrymandering, Citizens United, and the unbalanced allocation of Electors among other problems- the change we can affect is largely small and incremental. But those changes are real nonetheless, and they are largely born out of those few but very important differences that exist between the political parties. I agree with you that greater changes can be affected through local movements aimed at state and city governments. But we can't forget about our responsibility to hold the federal government to account. There is real power there, and a strike of the pen can affect hundreds of thousands if not millions or even billions of human lives.

Very helpful suggestions that help in the optimizing website.
I really like you post.Thanks for sharing.
goldenslot
Gclub จีคลับ
gclub casino