I haven't heard the term "netiquette" used in decades, so I figured I'd just date myself with the title.  I've been actively using the internet for 20 years now.  What has become known as social media for about 13 years.  I was very impressed with the organizing potential involved with all kinds of things that came along -- email lists, file-sharing, web-based media.  Social media -- particularly MySpace and then Facebook -- always seemed fraught with problems.  Largely related to the tight and ever-evolving corporate control of these completely corporate-controlled platforms of communication. 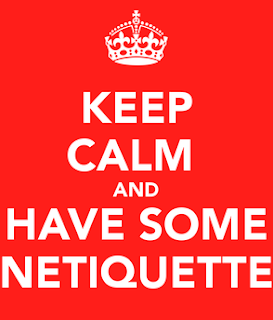 As these platforms of communication -- ultimately, really, just Facebook -- came to become dominant, I was always hoping that it would be a phase that would be replaced by something at least slightly more useful and less oriented towards endless displays of "mommy, look at me" in one form or another.  But, unfortunately, Facebook is the new way that most of us seem to do most of our communicating -- because everybody else is on there, and if you're not, you're basically in the dark.

Of course if you are on Facebook, you're also in the dark, for the most part.  You can try various techniques at communicating with your base, or at finding out what's happening that you actually want to know about, but for me it's a lot like finding a needle in a haystack.  A haystack where the needles you're looking for seem to be buried in the algorithms -- where the most useless bits of hay get systematically pushed to the top.

I have been told repeatedly by people in their twenties that Facebook is a generational problem.  That they know how to navigate it better, and find what they're looking for, than older people do, generally.  If this might actually be the case, I'd appreciate any enlightenment on the subject anyone might be able to provide, especially those of you who grew up online, which people my age obviously did not.

In any case, as this very imperfect medium has become the dominant one, I have only recently realized that I have to stop treating it like a necessary nuisance, and start really engaging with people out there using the platform, as best I can under the circumstances.  To that end, I have finally realized that what some of my younger friends have been telling me is true -- that is, Facebook and various other places online where interactions between humans take place are not best seen as forums for some amorphous notion of "free speech."  Which always seemed to be a default position for me.  Which in retrospect seems very strange.

Facebook and other interactive places online, such as comments beneath YouTube videos and blog posts, I have decided, are best treated as forums for friendly discussion between basically like-minded people -- far from a place where anything goes as long as it's protected by the First Amendment.

It took me years to even figure out how to get notified (in places that I would notice) when there was a new comment on a Facebook post or YouTube video.  Once I got that figured out, my initial orientation towards these comments was that I should read them, and acknowledge them, perhaps react to them in some way.  After much urging from various young, more web-savvy friends, I started policing these spaces to some extent, by deleting comments that were obviously racist, sexist, transphobic, etc.

Much more recently I came to the conclusion that this wasn't enough.  That these forums for discussion needed to be treated more seriously and respectfully than that.  I started trying to think in terms of what if this were a discussion happening after one of my shows or in some other social environment in the physical world.  How would I want to treat people, or try to guide the conversation in that space?  Not that I have the power to do that, necessarily, as one person.  But as the administrator for my own Facebook pages, YouTube channel, etc., I decided on certain courses of action.  It's too early for me to tell if this will have a positive impact, after all the damage that has been done by my laissez faire attitude up til, well, last month.

It was the way Facebook essentially caught fire during the first half of November that finally prompted these realizations, around the 2016 US elections.  Since then, on an average of every other day or so, I have been blocking people from commenting on my YouTube channel and blocking people from seeing me on Facebook (which also blocks them from commenting on my otherwise public posts).

Not just for saying things that are obviously offensive anymore, but for slightly more subtle reasons.  Such as anyone who comments with what is clearly a snide or insulting tone, regardless of what they are saying otherwise.  If it's not in the spirit of friendly, respectful discussion, they get blocked.  This has applied to both people who agree with me and people who don't, though probably more often for those who don't.  My goal is not to squelch a diversity of perspectives, but to promote a friendly, nontoxic atmosphere for discussion, for making friends, for solidarity.

I think it's extremely rare for anyone to benefit or learn anything or change their position because of an argument, whether the argument takes place in a bar, a living room, or a social media post.  It's just not the way people work.  If it were, then the toxic atmosphere and the microaggressions involved might be worth putting up with.  But they're not.

It's obvious when people are approaching a discussion with an open mind.  In such cases, differences of opinion can be useful.  But if people just seem to be venting, that's not helpful to anyone, in my newly-adopted view.  That includes me.  I stopped.  I no longer respond negatively to the negative comments -- I just block those people now.  I don't know why I ever thought I should engage with them in the first place.

I haven't decided yet, but I might even start blocking those people who habitually respond to my posts before they take the time to actually read or listen to them.  If I post a song, I'm very interested in what people think of it, who have taken the time to listen to it.  I don't want to know what you think of the title of the song, when it's obvious from your comment that you didn't take the time to listen to the actual song in question.  I think that kind of stuff is just useless noise, and very disrespectful in its own way.  What I feel like we need on Facebook -- as in society as a whole -- are more people who capable of truly listening, giving honest feedback, and engaging in respectful discussion.  Anyone not into that sort of thing can find somewhere else to yell at each other.

I feel like I've come to these conclusions very late.  I'd be very interested in anyone else's thoughts on these matters.  How do you deal with these things, and why do you do it that way?
Posted by David Rovics at 12:26 PM

Whatever you decide, I think it's good to be transparent about your policy, so… good start! Charlie Stross's blog moderation policy is perhaps a model of its sort: http://www.antipope.org/charlie/blog-static/2008/06/moderation-policy.html

The most useful metaphor I've found for these situations is that of a garden: you have plants you wish to thrive, and weeds that you don't, and you will wield your hoe as you see fit. Fair may your garden grow!

Facebook's newsfeed timeline is so crook (and they'd like people to pay to rise there). Twitter's timeline is perhaps better (for now). Google/G+/Blogger seem moderately straight (for now). But with all these services you're a mere pawn in the machine: maintaining your own domain (and promoting it in a diversity of venues) is the only way to maintain a degree of autonomy. And it's a heap of work.