Luigi Galleani: The Most Dangerous Anarchist In America

This is a book review of Luigi Galleani: the Most Dangerous Anarchist In America by Antonio Senta (AK Press, 2019) that appears in Fifth Estate #406, Spring, 2020. 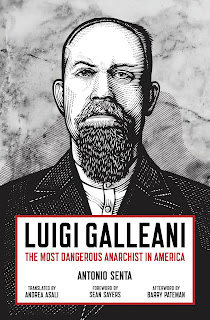 Sacco and Vanzetti, the Italian-American anarchists executed in Massachusetts in 1927 for a robbery and murder they probably had nothing to do with, had a favorite newspaper. They regularly visited its editor and his family on their farm outside of Boston.

The newspaper, published in Italian, was Cronaca Sovversiva (Subversive Chronicle), and appeared regularly for most of the eighteen years its editor spent in North America at the beginning of the 20th century. Following his deportation to Italy in 1920, he published a few more issues just before Mussolini seized power in 1922.

The editor’s name was Luigi Galleani, born in Vercelli, Italy in 1861. His life and times and how he earned the title of The Most Dangerous Anarchist In America is the subject of a succinctly-presented and exhaustively-researched book. It is translated from Italian by Andrea Asali with assistance from Galleani’s grandson, Sean Sayers, who also wrote the Preface.

In different languages and in many different countries, primarily in Italy and the US, the most common charge that kept Galleani moving frequently throughout his 71 years was Incitement to Riot. After fleeing repression in Italy he landed in the U.S. in 1901 and became an active participant in labor and anarchist activity, including becoming the editor of La Questione Sociale, the most read Italian anarchist periodical.

He was a militant participant in the 1902 Paterson, New Jersey general strike and advocated the overthrow of capitalism. Facing riot charges, Galleani fled the country, going to Montreal, but eventually returned to the U.S. to successfully fight the charges after raising and spending tens of thousands of dollars in legal fees, an astronomical sum back then.

From the time he was a young man until he was forced to leave Italy at the age of forty, he not only published anarchist newspapers, but translated Kropotkin, Proudhon and other important contemporary thinkers on the international scene into Italian. He frequently traveled on speaking tours throughout Italy, focusing on wherever there was a strike or uprising, always advocating to make it bigger, and make it spread.

His tours continued throughout the U.S. after his arrival in 1901.

He spoke to striking workers and others at events organized by Italian-speaking subscribers to his very popular anarchist newspaper, for many years based out of the hotbed of Italian anarchism, the quarry town of Barre, Vermont.

However, Galleani had to leave Vermont for his own safety, and relocate to the even bigger hotbed of Italian anarchists at the time, the suburbs of Boston.

The idea of an insurrection for revolutionary change advocated by Galleani in the U.S. had its germination in the turmoil of late 19th century Italy where he lived for the first 40 years of his life. At the time, Italian socialists, like many others, were divided over the question of whether a parliamentary path could bring real, substantive change to society.

Galleani’s popular and often very persuasive side of the argument was that participating in parliamentary politics in post-1848 bourgeois democracies in Europe was pointless. He called for armed uprisings to bring down capitalism and the state.

As poverty and hunger continued to be widespread in Italy and throughout Europe at the time, Galleani’s orientation of encouraging as many general strikes and insurrections as possible in the hope they would spread had a large following. His ideas continued to be popular among workers in the U.S. as well.

His advocacy of “propaganda by the deed” often published in Cronaca Sovversiva held that it was appropriate and even necessary to retaliate against, for example, police chiefs or others for killing striking workers, by killing them in turn. Galleani’s newspaper famously included a bomb-making recipe-book insert on one occasion, with an unrelated title hoping that would help evade the censors.

A series of bombings ascribed to Galleanists were carried out between 1914 and 1920 targeting politicians, owners, and police, the last and most famous being the 1920 Wall Street bombing which killed 38 people and severely wounded 143. It was these attacks which earned Galleani the title of this book.

Whether the tactics and strategies employed by Galleani’s wing of the large, international anarchist movement of the day would be considered adventurist, ultra-left, foolhardy, completely nuts or perfectly reasonable today obviously depends on who you talk to.

Three important things to bear in mind when considering what might be called the strategy of constant, eloquent, multi-faceted forms of incitement to rebellion that Galleani engaged in on both sides of the Atlantic:

One: In 1848, rebellions swept Europe during which every monarchy on the continent except for England and Russia were at least temporarily overthrown, and replaced, in many cases, with fairly significantly different forms of government.

Popular rebellions spread from city to city, country to country, crossing boundaries of nation and language, to form a continent-wide rebellion, affecting politics and life in many corners of the world.

This was just before Galleani was born, but he and everyone else in Europe in his time grew up in the shadow of 1848. There was every reason to think a general strike could turn into a revolutionary moment that would sweep up an entire nation since events like that had just happened. It just needed to go further, and not get watered down or eviscerated by reformist social democrats.

Two: Economic inequality during the 19th and early 20th centuries in both Europe and North America reached its high point during the age of the Robber Barons, a period marked by ruling class greed, horrid working conditions, harsh repression of workers, and rampant corruption. Hunger was widespread. The average textile worker in Massachusetts at the time usually died before the age of thirty.

Three: The tactics advocated by Galleani resulted in many victories for the militant end of the labor and the anarchist movements. However there were defeats as well.

People who become famous, or infamous, are often known for something that happened during one particular year or decade. Whatever they were doing before or after that period is often more obscure. Luigi Galleani was supported in so many ways by the movement he was a part of throughout his adult life in every country he lived in, especially by other Italian-speaking anarchists.

This support continued, though in a much smaller way, upon his forced return to Italy following a wave of bombings attributed to anarchists in the U.S. By the time of his deportation from the U.S. in 1920, simply being an Italian anarchist was grounds for deportation. In Italy, once Mussolini took over, it was an even worse place to be an anarchist, of any nationality.

If his funeral had taken place before Mussolini, there doubtless would have been tens of thousands of people at it, perhaps with a general strike to follow. When Galleani died in 1931, at the age of 70, only a handful of family and close friends attended, all watched by the secret police, as was Galleani’s every move until even after his death.

It was only years later that anyone dared put a tombstone in the cemetery where he was buried.
Posted by David Rovics at 4:44 PM No comments: