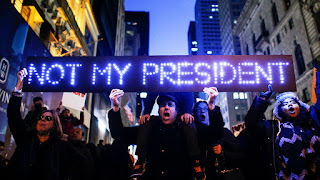 I wrote recently about how to have a good rally (hopefully as a small component of a broader movement that includes lots of other tactics).  I emphasized the importance of music and culture in any successful social movement.

Now I'll get more specific, and share with you my own songs that are especially relevant to the current situation.  Lots of other people have written relevant songs as well, and you'll find some of them on my Song News Network feed.

Here's my Trump Protest Playlist on Soundcloud, all in one place.  Below, links to individual songs, and an explanation for why they're in the playlist.


When Trump was campaigning for the presidency and he first talked about banning Muslims from entering the US, Islamic State started using him in their propaganda videos, as anyone could have predicted.  I wrote "God's Gift to the Caliphate" at that time, in late 2015.

It was only a couple weeks after that speech that Muslim passengers on a bus on the Kenya-Somalia border prevented Al Shabab from massacring Christian passengers (which they had done almost exactly a year earlier).  I wrote "One Day in Kenya" as a tribute to the courage of these Muslim bus passengers who risked their own lives to save others (and as a sneaky way to criticize the xenophobes like Trump).

More recently, riffing off of Trump's main campaign slogan, I wrote a critical but hopeful appraisal of my homeland -- "America Has Never Been So Great" (but it could be).

When Trump banned Syrian refugees from coming to the US, regardless of where they might have been at in the long, arduous process of applying for asylum in the United States, it reminded many people of other times the US had banned groups or nationalities from entering the country, such as in the years prior to 1944, when European Jews were an unwanted element, and the St Louis was turned away.  "Send Them Back" is about that episode in 1939.

Another time that people in the US were collectively punished for their national origins was when FDR signed the decree that all people in the continental US of Japanese descent should be imprisoned in camps.  Trump has expressed his deep approval of this sort of thing.  Here's "Liberty and Justice For All."

As the presidential decrees continue to be announced, people across the US are pouring into the streets and airports in solidarity with their fellow human beings who are being targeted.  Back in the 1840's, when the US targeting of Mexicans involved making war on the country and annexing most of it, there were many US soldiers who deserted from the ranks of the military, rather than fighting, once they saw that they were participating in a nakedly imperial, unprovoked attack on a neighboring country.  Some of them expressed their solidarity by joining the Mexican Army.  They were called the San Patricios -- "The St Patrick Battalion."

Trump is far from the first US president to target Mexicans and others from Latin America for abuse, expulsion, etc.  Around 2000 I wrote "No One Is Illegal" about this longstanding discrimination against so many people in the US on the basis of the color of their skin, their national origin, etc.

Mexicans being institutionally second-class citizens in the US is a longstanding bedrock principle of the US economy.  Lots of would-be migrants die trying to cross the border every year.  "Guanajuato" is about one of them.

During the George W Bush administration, many people were asking the same questions that are being asked on a widespread basis today.  Namely, is it possible to stand by in the face of such horrors?  In Bush's case, those horrors involved witch hunts in the US against many Muslims -- which continued under the Obama administration, incidentally -- and daily massacres committed against the people of Iraq and Afghanistan by the US military and military contractors.  In 2003 I asked, did you "Strike A Blow Against the Empire."

I predicted Trump's victory and I was not surprised when he got elected.  The Democratic Party had long ago abandoned the working class (aside from Sanders and a few others), and many people voted from Trump who used to vote for Democrats, in the assumption that they might defend their interests more than the (other) party of big business, the Republicans.  I wondered how they would be feeling once they realized that they voted for their class enemy, in reality, and I wrote "The Biggest Landlord."

Just before Trump took office there was huge speculation in the media and society at large about what he would actually do -- how would his tweets be turned into policy?  I wrote "What's Gonna Happen."

Many people in the US and abroad identify with the idea of the US as a haven for refugees, as represented eloquently on the Statue of Liberty.  I grew up thinking like that, too.  As the Obama administration was deporting huge numbers of Honduran and Guatemalan refugees during the wave of emigration that followed the US-sponsored military coup in Honduras in 2009, I wrote "Statue In the Harbor."

Trump's whole narrative around Muslims involves Muslims being barbaric terrorists with a general tendency towards backwardness of all kinds.  The historical reality is very far from this narrative.  No situation more eloquently presents this dichotomy than the events of 1492, when the Ottoman Empire sent its navy across the Mediterranean to save the lives of hundreds of thousands of Spanish Jews -- "1492."

Trump rails about terrorism, without acknowledging the basic, obvious fact that if you bomb somebody, they might just bomb you back -- "If You Bomb Somebody."

Under George W Bush, the US opened up lots of unofficial "black sites" where the CIA tortured people.  Bush officially said torture was wrong, but that was just the official line -- the reality was completely different.  Trump openly supports torture.  When the Abu Ghraib scandal hit the press I wrote "After We Torture Our Prisoners."

Trump thinks patriotism is very important.  He's even decreed that there should be a day where we show how patriotic we are -- in addition to July 4th and Flag Day and Presidents Day and all these other ones.  Here's "God Bless the USA."

I wrote "The Best Democracy Money Can Buy" a long time ago, but with an actual billionaire in the White House it seems even more appropriate than usual.

It's long been a desperate situation vis-a-vis the environment and climate change, and that's probably never been more true than today, both because we have never made the reforms to our society and energy grid that should have been made a long time ago, and because we now have an actual climate change denier in office -- "Here at the End of the World."

The Obama administration did too little, too late to help the folks at Standing Rock.  Trump owns stock in the company that's building the pipeline, and is determined to see it built.  Here's "Standing Rock."

Fracking has been banned in some parts of the US, because it's a terribly destructive practice that destroys the earth, air and especially the water.  Trump is hoping to reverse these bans and impose the corporate will on the people.  To which we say "No Fracking Way."

With deregulation and the promotion of ever more extraction of oil, gas, coal, etc., we will have lots more accidents such as the one that destroyed downtown Lac-Mégantic, Quebec -- "Oil Train."

As soon as Trump took office, Israel announced a massive program of settlement expansion.  This is apparently not a coincidence.  When the Israelis were building what is widely known as their Apartheid Wall in the occupied West Bank, I wrote "They're Building A Wall."

Some say Trump's election is evidence of severe divisions within the US ruling class caused by the desperation of their situation since the 2008 financial crisis, climate change, and other things.  If that's true, then we need to kick capitalism while it's down -- "Kick It While It's Down."

Trump wants to deregulate everything even more than Reagan, Clinton and Bush did already.  Which is really saying something, since those administrations collectively destroyed much of the regulatory infrastructure that this country used to have.  Deregulation of industry will directly lead to people dying in larger numbers in industrial accidents such as this one in Hamlet, North Carolina that I wrote about in "Sometimes I Walk the Aisles."

There has been extreme violence meted out before and during the Obama years, directed at people of color, certain ones in particular.  While Obama talked about bringing the country together and mitigating the racial divide and relationship between "law enforcement" and the general population, Trump wants none of that subtle stuff, and just proudly proclaims himself to be the "Law and Order" president.  Under Trump, we can expect many more police killings such as that of Eric Garner -- "I Can't Breathe."

With the unleashing of the "Alt Right" and other white supremacists these days, combined with Trump's desire to weaken gun laws even more, we can expect many more massacres of all sorts.  Such as the one in Charleston, South Carolina which I wrote about in "The State House Lawn."

Traditionally, when you're being oppressed by rich people trying to get even richer, you have to rebel to get anything changed around here.  That's what the tenant farmers of upstate New York did in the 1840's, against massive property owners like Trump and his daddy.  Except the Drumpf family was still in Germany in the 1840's, during the Rent Strike Wars.  Here's "Landlord."

If Wall Street ever needed to be Occupied, it's now, with more billionaires in the cabinet than ever before.  Many of them former Goldman Sachs officials.  Here's "Occupy Wall Street."

Years before the Occupy Wall Street phenomenon, the people of Iceland rebelled against the deregulation and corruption that had resulted in the Global Financial Crisis that Trump and his policies personify -- "Iceland, 2008."

Since Forecloser-In-Chief Mnuchin is part of the cabinet, we can forget about any People's Bailout.  Here's "A Dream Foreclosed."

I don't know where Trump's intense hostility towards China is going to end us up, but I know what happened during the first trade war against China led by the UK, the US, France, Russia and others back in the 1830's -- lots and lots of Chinese people died, in order to force the Chinese government to allow the UK to export their deadly opium.  Here's "Trade War."

In the darkest times it's crucial to remember that well-organized, big, militant social movements can change everything, anytime, anywhere -- "Everything Can Change."

One of the popular sayings during the anticapitalist movement that I was involved with at the end of Bill Clinton's presidency was "We Are Everywhere."  An important thing to remember, when it can seem not to be the case.

Trump's cabinet picks make it very clear who he thinks the world belongs to -- other billionaires.  Lots of the leaders of the Democratic and Republican parties seem to agree on this principle.  Many of us protesting Trump don't.  We think the world is a commons, that should be shared.  It's "The Commons."

Love -- combined with an inclusive, militant, massive mass movement -- can conquer all.  Here's "Behind the Barricades."
Posted by David Rovics at 9:36 PM