Two Musicians Sat Down at the Airport...

Some Thoughts on Marketing -- Engaging the Private Sector


At the beginning of this month I launched a project on my website, the US 2019 Tour Initiative.  In a nutshell, the idea is that once I sell 50 tickets in a given US state (at $10 per ticket), I then will plan on including that state in my 2019 US Tour plans, and anybody who bought a ticket gets in to any show of their choice for free.

Let me be very clear:  the reason I launched this campaign is out of sheer desperation.  It's not that I wanted to do it this way.  I'd rather tour the US like I used to, kind of like the way I still tour Europe today (where I am now, on tour until July 5th).  That is, relying on a combination of institutions (student groups, unions, political parties, arts councils, music venues), activist groups (in my case that has meant groups opposing war, militarism, sweatshops, "free trade," or groups supporting things like human rights, socialism, anarchism, the environment, Palestinians, and other struggles), and certain individuals to organize each gig.  My job when booking a tour was just to connect the dots -- figure out how to schedule the gigs people were offering to organize so that the tour made geographical sense (or at least so that it was geographically possible).

OK, but enter 2018:  I don't hear from any of those activist groups or institutions in the US anymore.  I almost only hear from individuals now, who say things like "if you play somewhere near where I live, I can't wait to go to the show."  But nobody makes a serious offer to organize a gig, of the sort that would make it practical to leave home and go to another state (which by definition means going somewhere far away, if it's not in Oregon or Washington).

Why do these groups not contact me anymore?  As best as I can figure, here's the rub.  The student groups don't have funding anymore.  The music venues can't operate the way they used to because they're too busy trying to pay exorbitant rents.  The activist groups that I used to be plugged in to basically don't exist anymore in the US -- by which I mean the groups that used to organize most of my non-college gigs, that were part of the antiwar or anticapitalist movements, among others.

Absent institutions and activist groups, what I've been left with is individuals.  Certain people who can afford to buy me a plane ticket and pay me something so I can come do a gig that might or might not break even.  So I end up doing a few gigs a year like that in different parts of the US -- most recently in California and Texas.

These few gigs represent a tiny fraction of the number of gigs that I used to do in the US.  But when they happen, they're usually great gigs.  In the past few days I had a couple of experiences that made me think perhaps I just need to explore this idea further.

Sitting at the Gate at Newark International

On my way to Europe several days ago I was waiting to board the flight to Oslo at Newark airport, when a young woman with a cello on her back sat down a couple seats away from me.  I then did what I admittedly usually do when someone near me has a musical instrument, and I asked her if she had a gig somewhere.

We struck up a lively conversation about being professional musicians.  She played classical music.  She was from the US, but she moved to Berlin because of the great music scene and the plentiful paying gigs just in that great city alone.  She had flown to New York City for a gig.  We talked about the differences between playing in Europe as opposed to playing in the US, and our experiences were identical.

She was much younger than me, and didn't know from her own experience that it used to be so different in the US.  She was too young to even know that merch sales used to represent a very significant percentage of many performers' earnings.  She was too young to even have had the experience of getting gigs at universities in the US, which used to be so plentiful for musicians of all kinds.

What she told me was that gigs in the US, on the rare occasion they happen for her, are funded by private donors.  Hmm, I thought.  My experience as well, I realized -- at least in the past few years.

And Then Tennessee Turned Red

Bleary-eyed from jet lag, missing my luggage, smelling like a combination of sweat and all the joints smoked by a packed room full of Norwegian squatters that had completely permeated every fibre of my hoodie the night before, I saw a PayPal notification on my phone a day after the conversation with the cellist.  Robert Dalton, a lovely lawyer in Tennessee who organized a couple nice gigs for me there years earlier, had bought 50 tickets. 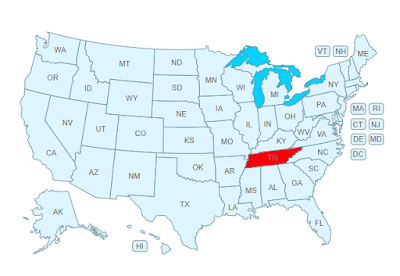 Since I started the 2019 US Tour campaign I have sold a handful of tickets in several states, but Robert's purchase of 50 tickets in Tennessee made that state the first one to turn red on the map -- meaning it's the first state that I will now be able to make part of my 2019 US Tour plans.

It then hit me that perhaps in the absence of activist groups or institutions, I need to work on nailing down what we indy musicians sometimes refer to as those "anchor gigs" by putting more effort into networking with individuals of means.

Let me just take a moment to bring you back in time to the 1930's.  In the 1930's, the working class in the US was organized like never before, and workers were unionizing workplaces throughout the country at an unprecedented rate, both despite and because of the Great Depression.  Many of the best union organizers were also members of the Communist Party, which had become a vibrant, massively popular organization.

For all its many flaws, the US Communist Party of that period accomplished many great things.  My late friend Bob Steck was one of many people I knew when I was younger (when they were alive), who was deeply involved with what was generally referred to as "The Party" of this period (much as someone in Connecticut would refer New York City as "The City").

Bob always emphasized to me how much the Communist Party of his youth invested time, energy and money in cultural activities.  The Party helped fund and run summer camps, theaters, theatrical productions and musical productions not just in New York and San Francisco, but all over the United States.

Other institutions such as the National Endowment for the Arts amplified the efforts of the Communist Party by funding many of the same cultural endeavors.  Before the NEA, most theatrical productions in the US occurred in either New York or California.  During the NEA's heyday, New York and California together represented only a portion of national theatrical productions that was roughly equal to their portion of the country's population.

17% of households in the US have a six-figure income or higher, and I'm pretty sure that statistic applies about equally to people in the US who are reading this.  While it's very expensive to live in many cities these days and there are many, many other things people can spend their hard-earned money on that can easily eat up all available cash, regardless of how much there is of it, I would deign to surmise that I can at least in most cases assume that most households bringing in six figures are in a position to host a house concert if they really want to, by buying 50 tickets in my 2019 US Tour campaign in one go, all by themselves.

But why would a person want to blow so much money like that?  Simple -- because no one else appears likely to do it, as they are too busy keeping their heads above water, or they're not really organized and they don't have any idea what's involved with putting on a gig that actually works from a financial standpoint.  So if it's going to happen, it's probably up to you who are reading this who are members of the (approximately) 17% of US society who can afford to do this sort of thing.

If you think the idea of a musician like me being able to tour throughout the US now and then is a good idea -- if you think that the message I bring when I tour, and the ability touring gives me to plug in to local social movements and sing at protests, etc. is a good thing, that this is worthwhile, then you have the ability to turn your state red, and put it on the map.

Of course, I still encourage folks of lesser means to buy a ticket or two if they can, in the hope that eventually there will be enough to put that state on the map.  But I think people will be more likely to buy one or two tickets once they know that I'll definitely be coming to their state.  And if I'm wrong about that assumption, it doesn't really matter -- if you turn the state red, I'll be there in 2019.

Now show me that there are people out there who make a lot more money than I do who think I'm making sense.  (Or not.)
Posted by David Rovics at 12:25 PM