A lot of people lately are more fully realizing the many down sides to Facebook.  Yes, it's only one of many massive corporations dominating much of the globe's online communications, but it's an especially problematic one on many levels.  With billions of users, it's so dominant it's almost impossible to ignore, especially for certain people, such as artists who need to be able to communicate with their audiences. 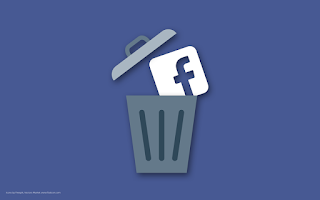 I'm not going to announce here that I'm joining the #deletefacebook movement.  It might be good for my mental health if I did so, but I'm not sure if my career would be able to take the hit.  And I say that despite the fact that in order for any significant number of people on the platform to hear about things like my tour plans or upcoming gigs, I and other artists like me more often than not have to pay to boost the post, since Facebook changed their News Feed algorithms years ago.  Ma Bell also really sucked, but deleting my Facebook account today seems a lot like living life without a phone line in 1980.

However, I've spent most of the past couple weeks being banned by Facebook for old posts related to a satirical London band called the Commie Faggots (mentioning their name is considered hate speech on Facebook, where satire is allowed but unrecognizable by whoever or whatever decides who gets banned on the platform).  It's been nice listening to the crickets, though more than a little inconvenient to be unable to respond to Facebook messages, less than two weeks before I embark on a tour of Europe.  And the experience has got me thinking about all those folks out there who have just deleted their Facebook accounts and may be wondering how to proceed now.

Mainly to all who have left Zuckerberg's corporation behind I say, take heart.  You may lose touch with a lot of people you probably didn't want to be in touch with so much in the first place, since so many people never leave Facebook, but you don't have to be like that.  And most of the things that Facebook was actually useful for are done better elsewhere on the web.  Rather than being a passive recipient of how Facebook's latest redesign or change in algorithms affects your life -- what you read, who you communicate with, what you hear about -- you can spend a little bit of time figuring out what you want to keep track of in life, and do it all without Facebook.

Here are 10 alternative ways to do some of the things you you might have been doing on Facebook, but better:

Me We is also pretty good https://blog.mewe.com/the-mewe-social-network/

Hi David I have deleted my Facebook account. This came very timely (and I am not sure how as I never ever use Google+!). I do miss the comments on news and stuff like that but - so what! By the way my offer stands if you need somewhere to stay (or base things like CD's) when in or near London. I work 7 am to 7pm Monday to Friday so it may be a problem to catch me but you know my mobile so I will see what I can do.

I retire end of June so I will have heaps of time to do things after that!

Due to business commitments, as well as local activism, I can't quit Facebook, but I am changing how I use it, and moving more to Twitter and Youtube, and maybe Soundcloud based on David's recommendation. As I posted on FB, we've helped create a monster, and now are slaves to it. The more users who throw off those shackles the better. Congress isn't going to regulate it properly anytime soon.

Thanks, David, for your persistence in communicating through all these tools and platforms. Sad that it's complicated our lives more than eased them.