I had a dream about you

Some thoughts on Community-Supported Art, music, and life. 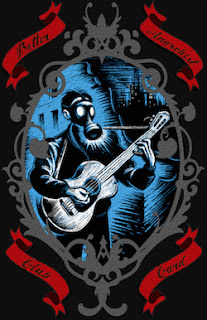 Wound up another tour of Europe (check out my blog post, complete with photos and embedded videos), getting ready for a tour of the western US (which will include a gig with Joan Baez and Tom Morello at the end of it), making plans for a new rug rat, getting several hundred copies of my new CD packed up to mail to subscribers, and thinking about some things...

For one, my friends keep aging, like me. In 1-1/2 years I'll be 50, which seems like a significant milestone. Like the age when even if you're going to live a long time, you're probably at least halfway done.

There are a lot of things I'm still hoping to do before I kick the bucket, though. And given that I don't buy lottery tickets and have no hope of being adopted by a major label, I've only been able to come up with one way to make this happen that seems at all viable.

As a DIY touring musician, my career has been entirely crowdsourced. That is, I've entirely relied on volunteers to organize every gig I do around the world. I'd do it all myself, but that doesn't work (I see people fail in that effort all the time).

But there are obviously limits on how big my audiences will be and how much money I'll make that way, and I stumbled upon the concept of the CSA as another income stream that's also based very much in the crowdsourcing concept. It's been very significant, I'm happy to say.

With the farmers it's a somewhat more physical thing, but the concept is the same. You subscribe to them, signing up to pay them x amount of money per month, and in return you get a box of whatever it is they produce that month. This way of doing things frees the farmer from the vagaries of the market, and from having to find places to sell their stuff, and lets them focus on doing what they do best, knowing they have a regular clientele through their CSA members.

With my CSA, people sign up to give me $50 a year (or $4.50 a month) and in return they get CDs in the mail, a card giving them free access to almost any of my shows, and other perks. There are also various other circles of CSA membership, involving more money, and more perks, such as house concerts and song commissions.

The CSA So Far

Soon after launching my CSA in the spring of 2013, I reached 300 members. Since then it's stayed steady at around 300. I lose about 10% of my subscribers every year, and gain about the same number through new subscribers, keeping it even at around 300.

Which is fantastic. It has allowed me to tour a little less, so I'm “only” on the road about 200 days out of the year. And it's helped make up for the loss of CD sales, since many (probably most) people stopped buying CDs in the past several years of the evolution of the internet.

However, 300 CSA members has not been enough for me to really even think about doing some of the many things I still dream of doing, if I were to reach my original goal of 1,000.

How the CSA Works

P.S. On Saturday, October 31st, at 2 pm Oregon time (5 pm in New York, 10 pm in London), I'm going to do a Periscope session – just for folks on the internet, no “studio audience” or anything. I'll sing a few songs, and talk about whatever people out there want to talk about – my November tour, thoughts on the refugee crisis, or whatever else. Questions about songwriting or playing the guitar perhaps? Just tune in and send a message there – I'll be watching out for each one of them that pops up. Tune in at twitter.com/drovics.


P.P.S. I'm running my own online store now from my website. CSA members get anything in there for half price.
Posted by David Rovics at 11:25 AM