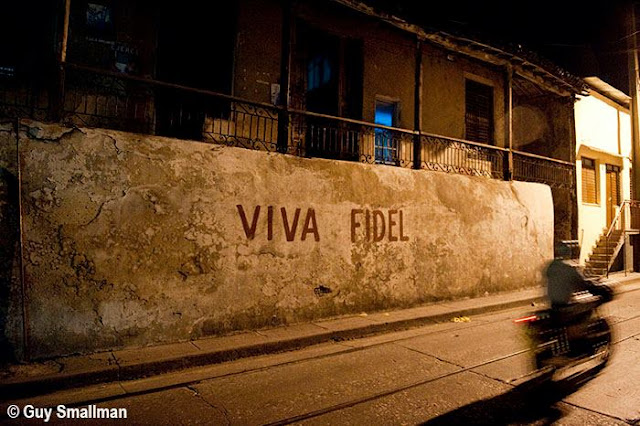 When you win a revolution, you might stop when you're ahead
But in the Havana Declaration the revolutionaries said
Wherever people anywhere are found to be oppressed
As long as we have hearts that beat within our chests
It is our duty to support them – and Cuba sent their troops
And Cuba sent their doctors, in ever-larger groups
And their leader was the one in the track suit and running shoes
Commandante Fidel Alejandro Castro Ruz

It could have been someone else, and he might be the first to say
The movement makes the leader, not the other way
But around the world right now, sitting at their dinner plates
There are people praising this man who stood up to the United States
And lived life as a beacon for a new society
With housing, healthcare, education and the human right to dignity
Central to the vision for which he stood accused
Commandante Fidel Alejandro Castro Ruz

I can't predict the future, but if the past is any indication
Many more will follow the trail of the little Cuban nation
And soon in Havana, I hope that we may see
A statue of the man, to go beside Jose Marti
But wherefore goes Havana, or Angola, Mozambique
I'll always remember the big man's rosy cheeks
If the world could vote for a leader, how many just might choose
Commandante Fidel Alejandro Castro Ruz
Posted by David Rovics at 6:58 PM

Email ThisBlogThis!Share to TwitterShare to FacebookShare to Pinterest
Labels: remembrance

Thanks for the song poetry for Fidel.