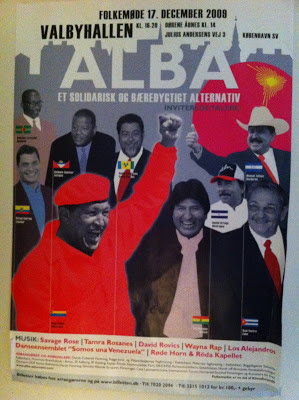 I don't know about you, but I feel a somewhat surprisingly personal sense of loss at the death of President Hugo Chavez of Venezuela. Anything else aside, this man and the popular social movement he has played a huge role in, not only within Venezuela but around the world, has been a massive, positive influence for untold millions of people. He and the many positive aspects of the transformational process that has been underway in Venezuela and most of Latin America, really, especially since 1998, have changed the lives in a very physical way for millions of our sisters and brothers, and have been an inspiration for those struggling to make the world a better place in every corner of the Earth, very much including within the belly of the imperial beast, here in the USA.

For those of us who have spent much of the past 15 years protesting in one form or another at gatherings of the global elite -- meetings of the World Trade Organization, the World Economic Forum, and other such spectacles -- there was always one consistent voice within those meetings that denounced these elitist proceedings as eloquently and as firmly as his friends in the streets outside the halls of power.

And as the years have passed since his first landslide election victory in 1998, one after another Latin American country has seen the left come to power, with people like Evo Morales go from leading a union to leading a nation. I don't have any idea what those of us in places like the USA would have done over the past 15 years without the example of the Bolivarian Revolution shining its light in what often seems like an otherwise fairly dark room. An imperfect light, to be sure -- I can already imagine some of the emails I'll be getting by tomorrow from some of my favorite anarchists -- but a powerful light nonetheless, and Hugo Chavez has been at the center of it.

One of the most memorable experiences of my life will probably always be December 17th, 2009, on a very cold, cloudy day in Copenhagen, when I had the privilege of being one of the performers to warm up for Hugo Chavez, Evo Morales and other speakers at a large hall a short walk from the house I usually stay at when I'm in town.

Here's a video someone took of me singing my "Song for Hugo Chavez" at that event, which was broadcast soon thereafter on Venezuelan television. (I know this because I got emails from both supporters and detractors of the Commandante after it aired, which made reference to this song on the TV.) The picture to the upper right was taken from the door to my bedroom here in Portland, Oregon. It's a tattered poster from that event 4 years ago.


And here is a video from the great Uruguayan songwriter, Daniel Viglietti, which I think sums up the spirit of the Bolivarian Revolution brilliantly, his song, "A desalambrar" (with English subtitles on this video).


I'm sure I'll have more to say on this subject later, but for now, signing off. La lucha continua!

Great loss to the world. We will just have to carry on Hugo's work....from the inside.